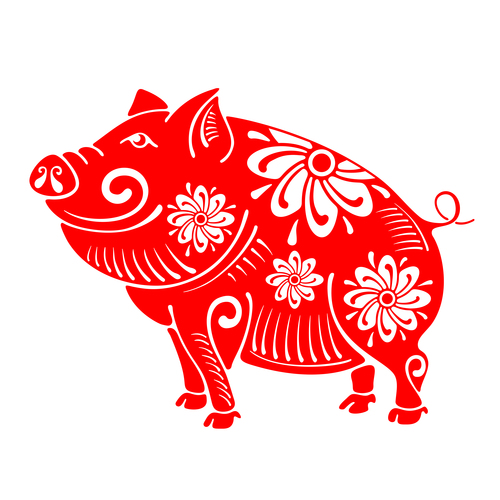 It’s a Zoo Around Here…

Our office is full of Tigers, Pigs, Monkeys, Rats, Horses, Dogs and Dragons… if you have no idea what we’re talking about then read on…

Today marks the first day of the Chinese New Year, and it’s Year Of The Pig.

We are taking a look at the Chinese Zodiac, help you discover what your Zodiac Animal is and whether the characteristics are accurate but first, what about the Pig and how does this relate to seafarers?

Pigs are classed as lucky animals for seafarers as mentioned in our previous blog The Art Of The Sailor, a pig tattooed on the foot was designed to protect a seafarer from drowning in a shipwreck. It is thought that pigs survived wrecks as their wooden shipping containers would keep them afloat. So with this being the Year Of The Pig we thought we would share some information about the Chinese Zodiac.

The Pig is the twelfth and last of all zodiac animals. According to legend the Jade Emperor said the order of the zodiac would be decided by the order in which the animals arrived to ‘the great meeting’, and pig was late!

One story is that Pig was late because he overslept. Another story says that a wolf destroyed his house so poor Pig had to rebuild his home before he could go to the party.

In Chinese culture, pigs are the symbol of wealth, their chubby faces and big ears are signs of fortune as well.

Those born in year of the pig are said to have the following characteristics.

ZODIAC CHARACTERISTICS – WHAT ARE YOU?

If you’re not a Pig then what are you? Read through the characteristics of your Zodiac animal here;

Snake
Years: 2013, 2001, 1989, 1977, 1965, 1953, 1941, 1929, 1917, 1905
Characteristics: While many deemed the Snakes are sly and cunning, the Snakes are actually talented and graceful creatures. They are also wise and subtle in their ways. They are generally people who care about their looks and are sometimes rather stingy. However, if only the Snake knows how to make use of their true qualities, they will find themselves quite popular. A Snake is best with the Rooster and Ox, while it hates the Pigs.

Horse
Years: 2014, 2002, 1990, 1978, 1966, 1954, 1942, 1930, 1918, 1906
Characteristics: A Horse’s high spirit and energy are engaging. Their positive outlook in life also makes them well-liked among friends. By nature, those who are born in the year of the Horse love to travel, preferably alone. Because of their character, they are generally impatient creatures, therefore they should learn to chill out and finish whatever tasks they’ve started on. Good mates for the Horse are Tigers or Dogs. Rats are definitely out.

Monkey
Years: 2016, 2004, 1992, 1980. 1968, 1956, 1944, 1932, 1920, 1908
Characteristics: Monkeys are fun people to be with because they are confident, energetic and happy. They are also curious creature. Attention is always showered upon them because of these attitudes. However, if a monkey gets overly confident, they can confuse themselves. Monkeys are advised to stay away from Tigers and find solace in Dragons or Rats.

Rooster
Years: 2017, 2005, 1993, 1981, 1969, 1957, 1945, 1933, 1921, 1909
Characteristics: And so when the Rooster crows at the crack of dawn, it wakes us up. Roosters are generally punctual people, totally reliable and independent. They also enjoy taking centre stage and are sometimes vain creatures. Because of this, the dependable Ox and shrewd Snakes make good friends while the solid Rabbit smells trouble.

Whether you’re a Dog or a Pig, a Snake or a Dragon we wish you a very Happy Chinese New Year and a prosperous 2019.