Established in 1981 at the kitchen table of their Bishopbriggs home, David Livingstone (OBE) and his wife Sissel started the business shortly before David was made redundant from his ship management role.

Clyde Marine Recruitment Ltd (CMR) was the catalyst of what became The Clyde Group which incorporated marine travel, marine training and both seagoing and onshore recruitment. 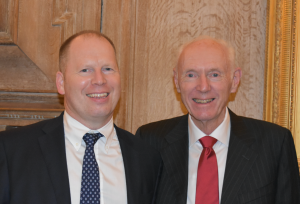 In 2008, David retired following a multi-million-pound management buyout that was to preserve the business and its 150 staff members. Several key industry players made historical approaches to purchase the group, but the wellbeing of the staff and continuation of the business was David’s priority.  He went on to receive an OBE for his services to the Marine Industry in the same year.

Ian Livingstone returned CMR to family ownership in 2011, as they de-merged from the Clyde Group. He embarked on a major period of restructuring and investment which included consolidation of UK operations to their Glasgow headquarters and opening of a Polish branch office to complement their existing Latvian office. Both these offices support operations for blue chip clients including Northern Marine Management, Stenaline, Isle of Man Steampacket, DFDS and NorthLink Ferries.

View some highlights from the last four decades here…